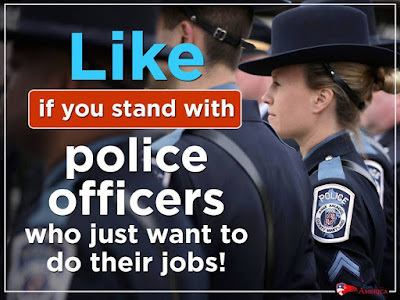 Of coarse we stand with our police officers!

And we've got'em! All we can afford!

There is no question that the greater preponderance of our police officers are true and honorable members of our society.

It's not the 99% of decent police officers that are disturbing the general public. It's the oft claimed 1% of police miscreants that causing a definite backlash against all police officers!

Hiding the fact that we have cops that become judge, jury and executioner the moment they slip into their uniform and weapons is detrimental to society.

Unfortunately we have misguided authorities that believe supporting bad cops is in the best interest of police. 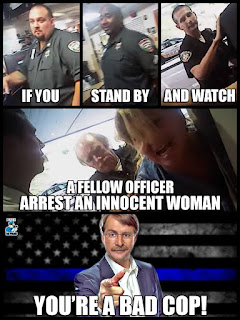 Protecting and supporting bad cops is doing no one any good! In fact protecting bad cops is justifiably causing alarm and distrust. It's damaging the needed public participation between law enforcement and the very society law enforcement is supposed to secure. It is reported that Citizens killed by police in England during 2016 is 5 whereas Citizens killed by police in America during 2016 is over 1155.

At the very least unwarranted police brutality has sponsored several exposing entities such as: Photography is not a crime and Filming Cops.

It's police brutality that has contributed to the increase in the murder of police officers!

Backlash against police brutality is growing at an alarming rate and threatens the whole superstructure of law enforcement.

Silvio Ranieri Finally with the new technology now people are seeing some of these "cops" for the crooks and criminals that they really are. It is a shame because it gives quite a black eye to those who really want to do a good job and do their best to provide safety for the people that they serve.

Lucinda Wu Wonder why putting a bullet in someone restrained, tazering, kicking the shit or sexually violating a black person doesn't justify proper justice, oooops because they're black, fooooorgot.

Trina Harvey "State Police said Huntsman maintained his innocence even after he was shown a video that was captured on the dash camera of his police car and showed him taking the money."
http://www.courant.com/.../hc-hartford-trooper-pension...

Przemyslaw Slomski I bet its first crime in his 19 years career...

Joel Saeks This needs to happen more often they lose job and pension, add locking them up would be a trifecta!

Sarah Lorien Wait, wait, wait.... So you can murder people, but not steal from their demolished death car?

Adrienne Brietzke How despicable. Put his face all over social media!!

Yolanda Jackson That. Is. So. Good. Hope he's fired two and lost all his benefits

Raymond Boynak Absolutely shameful and disgraceful to the uniform...

Victor De Leon STUPID IS AS STUPID DOES.

1
· 3 hrs
Manage
Top Comments is selected, so some comments

Posted by Niagara Winners Circle at 11:57