Well finally! Finally we have a Niagara Regional Police Services Board worth having as clearly illustrated by the report and video provided by Standard news.

This new brand of NRPSB members are actually asking the questions that many informed Niagara Citizens are asking.

They are asking why ‘Convicted Violent and Armed Criminals’ are being retained on our NRP.

Some citizens are asking: What do you call an organization that harbours Convicted violent and Armed Criminals?

They are as concerned about perjurer police officers devastating our justice system.

This new brand of NRPSB members are questioning how all this skullduggery can go on while in Ottawa a cop is forced to resign because he met with escorts!

Our police chief is the former Toronto Staff Superintendent who endorsed the illegal G20 conduct of the Toronto police force, a force with police officers now charged and convicted in court for illegally abusing citizens. 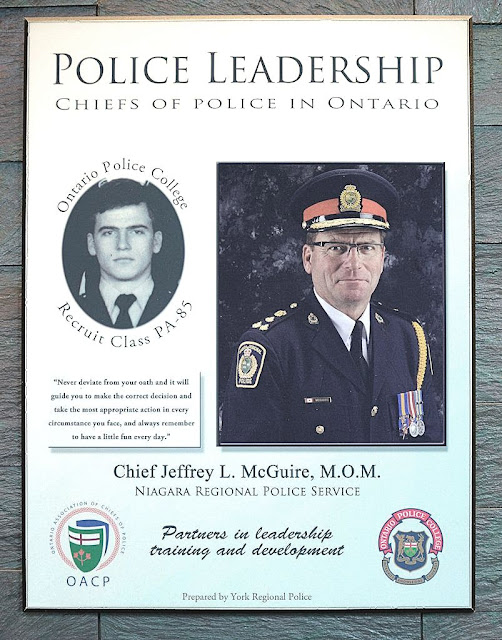 You will observe that in the video our Chief of Police spent considerable time explaining valid reasons for ‘carding’ of citizens. Please note that the board members extensively questioned the Chief’s position regarding the ability for innocent citizen’s to exorcise their right to refuse to be carded.


Now we find that for some reason the police did not contact the SIU for over three weeks after the vicious police beating of NICK ZAIDENKO!

The SIU seems to be having the same trouble as our NRP in justifying the reason for a citizen having been criminally beaten into a three day coma for refusing to be ‘carded’ by, as yet, unnamed police thugs.

Not to worry Citizens of Niagara! Our Chief of Police has now been promoted to the highest police position in the land. As President of the OACP, with its more than 1,500 members, Chief Jeff McGuire will represent the RCMP, the OPP, First Nations and Municipal Police Services across Ontario.

Question: Will our NRP Chief Greg McGuire take his brand of policing with him to the OACP?

The Chief Fights Back

On Wednesday, July 8, the St. Catharines Standard published an article based on a social media posting by Mr. Andrew Petrowski on his personal Twitter account. Mr. Petrowski is the Vice-Chair of the Police Services Board. The focus of the article was same-sex marriage.
I think it is important that, as your Chief of Police, I restate my commitment to ensuring that our organization maintains a climate of understanding and mutual respect for the dignity and worth of all of our members and the people we serve. (SPIN) The Ontario Human Rights Code guarantees protection in a number of areas including family and marital status, gender identity and gender expression, sex, and sexual orientation.  Same sex marriage has been legal in Canada for over ten years.
This Service's Mission statement makes a strong declaration about the things that are important to our organization.  Not only are we committed to serving and protecting every resident and visitor within the Regional Municipality of Niagara, we are just as dedicated to providing a professional, satisfying work environment that respects the rights of every employee and encourages personal and professional growth.
I am proud that our organization is committed to the principle of providing responsive, diversity-competent service so that people of different backgrounds experience NRPS’ belief in fair and unbiased policing; compassion and understanding; approachability, courtesy and openness in a way that is meaningful to them.
Jeff McGuire, M.O.M.
Chief of Police

Deceptive talk from a chief that harbours convicted violent criminals that bash innocent citizen’s skulls in and beats citizens into a 3 day coma causing a financial liability worth $100’s of millions.

A Citizen Strike Back
Click Link to see Chief McGuire's police in action...

Perhaps the problem is 'CLIMATE CHANGE'!!!

Posted by Niagara Winners Circle at 09:58