What is beyond belief is that any resident of Ontario sees Prime Minister Harper as worse than our Premier Wynne! 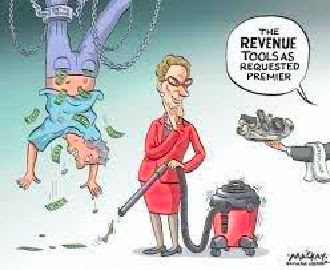 If the Ontario Liberals could spend Ontario rich, our streets would be paved with gold by now!

Unfortunately, as a report by Philip Cross, former chief economic analyst for Statistics Canada released last week shows, the opposite has happened.


After 12 years of spendthrift Liberal rule since 2003, first under Dalton McGuinty and now Kathleen Wynne, Ontario has fallen down and it can’t get up.


Cross’ report prepared for the Fraser Institute — Ontario: No Longer a Place to Prosper — is a devastating indictment of the economic mismanagement of the Liberals. To wit:


“Ontario, once Canada’s economic powerhouse, has experienced an historic reversal of its fortunes within Confederation over the past decade.


“This superior economic record was achieved despite periodic recessions due to the cyclical nature of its manufacturing industries such as automobile factories. “Ontario’s enviable economic performance made it a beacon for people from the rest of Canada and around the world.


“Given its above average income and large population, Ontario was the lynchpin of the federal equalization scheme redistributing income from so-called ‘have’ to ‘have not’ provinces.


“Since 2003, however, economic growth in Ontario has lagged the national average every year.


“Chronic slow growth sent Ontario’s unemployment rate above the national average for the first time on record in 2007.


“A sputtering economy and rising unemployment culminated in Ontario’s real per-capita incomes falling below the Canada average for the first time ever in 2012. “Weak revenue growth and rapid government spending resulted in a doubling of Ontario’s provincial debt, triggering two ratings downgrades ...


“The disturbing trend of these statistics can be seen in the everyday lives of Ontarians.


“Ontario was once a beacon for migrants from across Canada and around the world.


“Ontario in 2002 attracted over half of immigrants arriving in Canada; by 2014 it was no longer their preferred destination, with its share falling to a record low.


“Since 2004, there has been a net migration of its population to other provinces ...


“Youths have borne much of the burden of a faltering economy, with their 16% unemployment rate over 10 points above the adult rate, the largest such gap in the country.”


This is the reality of the Liberals’ tax-and-spend philosophy they try to hide by boasting, absurdly, about beating their inflated deficit projections.


It’s true Ontario has faced several economic shocks the Liberals couldn’t control — the 2008 global recession and a high dollar and high oil prices (until recently) among them.


But it is their own Liberal policies which helped to drive Ontario’s economy into the ditch.


The Liberals gambled with our money and we lost.


Something to think about before the next election in 2018.
Posted by Niagara Winners Circle at 21:07