Justice You Can't Count On ! 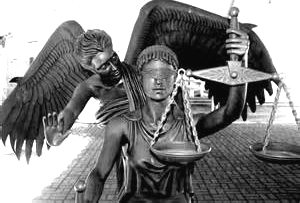 Now just what would make a writer declare 'Justice You Can't Count On!'.

When entering the two main court houses in Niagara you will have to pass through a metal detector, have you purse searched, be scanned with a portable scanner paddle and even have to raise your pant legs so show your socks. You might say the exercise is for security. You might be right until you enter the court room in other jurisdictions and find they hold court without such security.

Furthermore it rankles the senses to realize that the security officers are police officers doing desk-duty because they have been charged with crimes.

Then of course there is the court cases themselves with the completely contrary decisions emanating from the various justices. One justices decides that Conservation Authority Officers have the same rights as Police and Fire Officials to trespass as they please, roam around and take pictures. Another justice understands that Conservation Officers must obtain a court order or at the very least provide notice before they trespass, take pictures or gather any evidence.

One justice even allows ignorance as an excuse.

Sadly your whole case can hinge on decisions like these!

Worse yet you can find yourself facing a crown prosecutor and a justice both of whom obligated to your accuser.

It's getting harder to tell where justice leaves off and injustice begins!

I wrote a short article regarding justice in our legal system. I used the image below which I felt best represents my diminished respect. 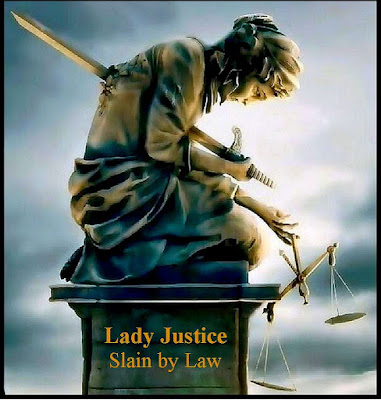 It is alarming to see how many citizens are starting to view our legal system as not much more than a crass cash grab!


Here’s how I see it. The province owns 87% of the land mass in Ontario (see Ministry of Natural Resources and Forestry site). We continue to lose more land daily to our province’s control, due to new builds, be it condos, subdivisions, expropriation, etc. It appears all 3 ruling parties would like to get 100% control of the land mass in the province. Matters not what government is in power, the other two parties see the advantage of FULL CONTROL.

I validate my theory by the fact our 3 main parties refuse to acknowledge the Crown Patent which gives owners full rights to their property with some reservations. If there is an argument for the greater good, i.e., Thundering Waters in Niagara Falls the land is suppose to be purchased by our government at fair value market and keep it safe, whatever the reason, for future generations, i.e., use it for a nature park, etc. This action would save our remaining wetlands. Instead we see a developer destroying a Provincially Significant Wetland, with no repercussions. The man living next door who witnessed this event notified Niagara Peninsula Conservation Authority, Ministry of Natural Resources and the municipality involved. Almost 2 years later he is still waiting to hear what actions will be taken to remedy the destruction of this wetland. Our provincial government came up with a bizarre idea of their own, they call it biodiversity offsetting, to justify allowing a wetland to be destroyed and replicated elsewhere.

However, when it comes to property owners, wetland becomes the ultimate sin. Our courts are not acknowledging our Crown Patents which gives us rights to our property. Preston Haskell has been covering stories about property owners who get charged for developing on a wetland and about people who attempt to save a wetland, read: News Alert Niagara or Niagara Landowners. You won’t read these stories in our local newspapers; way too politically sensitive. PLEASE PEOPLE WAKE UP BEFORE IT’S TOO LATE! If you want to learn more, attend the Niagara Landowners Annual General Meeting, Friday, May 12th at 7 p.m. at Rockway Community Centre and hear our Guest Speakers: Gary McHale and Ed Smith speak to matters of importance to Canadians. Google the two names for more information. Erika Furney


Distressingly, Greg, you are correct -- on all points. I hate to be repetitious, but for the longest time I have said that we (the citizens of Canada) have brought this type of thing upon ourselves. We became indifferent, indolent and ignorant of our political system and, because of that, we let the horse run away with the cart, so to speak. We did not examine the political candidates. We did not question each and every candidate thoroughly. We allowed ourselves to be led down the garden path by those who we "assumed" were honest and trustworthy. We failed to recognize the realities of history that teaches that that is the path to destruction of societies throughout time. We became pawns in a game of power and looting and never once, to my knowledge, demanded an accounting. We took their word that things were fine and if and when we felt something was wrong, we were told (and accepted) the typical political answer that whatever it was that got our attention we were assured that it was "merely a temporary discomfort and will be rectified shortly" Back to sleep we went and ignored the realities that an accounting by these 'public servants' was in order. So now we are where we are and, sadly, it appears that things have gotten out of hand. We forgot that 'public servants' are supposed to 'serve the interests of and protect the interests of' us, those that have allowed them to accrue benefits and privileges not attainable by the average individual. Perhaps, but only perhaps, this could be brought back to what it should be, but that cannot and will not happen without very serious actions by those affected -- the taxpayer.
Please make your views known in the Comment section below...

Posted by Niagara Winners Circle at 19:47