There goes the Niagara Peninsula Conservation Authority (NPCA) again trying to spread their gospel of Authority.
. 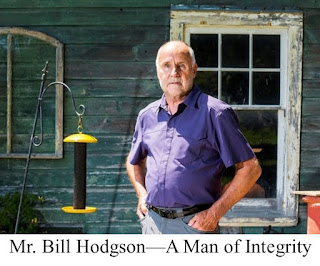 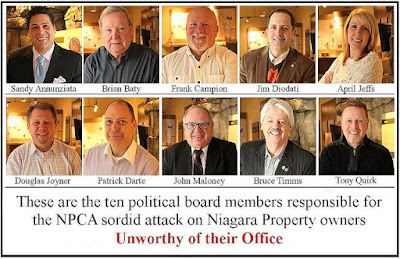 What the former NPCA could not tolerate was the fact that Bill Hodgson had something that they didn't have and that was Integrity!
.
In fact it must have come as a shock to the former scoundrel-laden NPCA when the public disagreed with their conduct to such a degree that the miscreants found their sorry asses kicked to the curb.
.
However, since the new NPCA Board is in the mood to do what is right maybe, just maybe, they could or should consider an apology to the innocent Citizen/victims of the past corrupt NPCA bums who abused and in some cases totally destroyed them.
.
For the benefit of the new NPCA Board we have added just a few of the Citizens that the NPCA and their pals in the judiciary abused and destroyed.

.
Without dwelling on what was in the exhaustive report regarding the failures of former NPCA boards or the conduct of NPCA executives we will simply supply a response to the exception.
.
This Link takes you to the 'News Alert Niagara' study in political Corruption.
.
Below you will find just 12 of the many stories pointing out the horrendous stories of abuse suffered by Canadian Citizens at the hands of Conservation Authorities.

1.
Here is a story of a couple who did everything right to start their little business in Welland, Ontario only to be destroyed by the Niagara Peninsula Conservation Authority. (NPCA)
On top of going back to college, getting all required permits and even paying $thousands for an environment assessment the NPCA crushed them after their first few sales and on what basis?
On the basis of connected underground aquifers, a non-existent Black Gum Tree and a dead turtle skeleton in the roadside ditch.
The Laws permitting this lunacy run closely akin to the old witch-craft trials.
http://newsalertniagara.blogspot.ca/2015/01/the-barnfield-story.html

2.
Then there is the story of a couple who made the big mistake of purchasing a so-called ‘Provincially Significant Wetland’ predicated on their love of all things in nature.
Mistake, because taking on the obligation as official PSW managers, they have suffered harassment, extortion and even malicious prosecution, which the Niagara Peninsula Conservation Authority has been known for in the past.
The Niagara Regional Government not only condones this specious conduct, but they even participate by lending regional staff time and facilities including their legal department.
http://newsalertniagara.blogspot.ca/2015/02/protecting-wetlands.html

3.
This crime story began when Conservation authority drained ‘CONSERVATION Land’ onto the White Family farm. Mr. White senior died under the strain of illicit litigation leaving Son Dave and his Mother to carry on defending their innocence against NPCA employee perjurers, who were themselves terminated for not lying good enough!
Dave complained because the CA was flooding his land. So the Conservation Authority simply changed the designation of Dave’s land to wetland and charged him and his mother with farming a wetland. After four years in court, their entire life savings was sucked out of them.
The Region’s lawyer, representing the Conservation Authority asked the judge to have Dave White and his 82-year-old mother thrown into prison for 2 years and he also requested a $50,000 fine plus costs and all this in the NPCA’s failed attempt to pad their bank account.
However, Dave had proven that the Conservation Authority had changed the mapping and the water course flow in the creeks — amongst other things — to suit their own case.
In the end, the judge saw through the malicious scheme and chastised Niagara Region's Lawyer for using the court system as a weapon against common people.

4.
Another failed and costly attempt involved the NPCA in a decades long vendetta against an innocent City of St. Catharines, Ontario resident.
A cabal of so called environment protectors unleashed a tyrannical assault, not only against an innocent citizen, but also against the environment that they are supposed to protect!
http://newsalertniagara.blogspot.ca/2015/05/the-willie-wakulich-story.html

5.
Perhaps no other story epitomizes the tyrannical predilection of the Niagara Peninsula Conservation Authority as that of Mr. Len Greenaway’s story recently written in Niagara this week Newspaper.
The NPCA cannot claim any description other than tyrannical when it accepts donated property and then cuts off common and traditional emergency water supply simply because it has acquired that power!
The NPCA has be getting away with tyranny based on framing their tyranny as conservation!
http://niagaralandowners.homestead.com/NPCA-UNfair.html

6.
Other NPCA tyrannical activities include their attempt to destroy the last remaining 'Wetland Forest' in Niagara Falls, Ontario in favor of Rich Chinese Developers!
http://newsalertniagara.blogspot.ca/2016/09/enough-is-enough.html

8.
NPCA Tyrants allow millions of tons of Carcinogen toxic waste to be piled hundreds of feet high with-in the urban boundaries of Welland , Ontario for a gift of $5million!
http://newsalertniagara.blogspot.ca/2016/06/niagaras-mount-carcinogen.html

10.
The same NPCA tyrants that lord their authority over private citizens and their private property are the same Tyrants that build commercial banquette halls on our much vaunted UNESCO World Biosphere conservation park paid for by the company that created Mount carcinogen!
http://newsalertniagara.blogspot.ca/2015/01/the-barnfield-story.html

11.
After losing their years-long persecution against an innocent St. Catharines city resident, the NPCA and City convinced a court that by finishing his legal Solar array project he further violated the law under the spurious argument that he created a new development. This corrupted equity theft cost the Citizen additional $thousands!https://newsalertniagara.blogspot.com/2018/07/an-extraordinarily-disgusting-story.html

12.
Consider Jean and Peter Thomas' story because I believe you will find it interesting to learn building a sand ring on your property to exercise horses; will land you in court, fighting for your property rights resulting in huge legal fees, a $600,000 lien on your home and tens of thousands in fines and all because they did NO damage to the environment.https://newsalertniagara.blogspot.com/2018/12/how-does-any-self-respecting-government.html

Instead of the NPCA trying to chisel more hard earned dollars out of the hapless taxpayer over climate Change, which is something the NPCA can do nothing about, they could ask our seemingly feckless hundreds of lawyers of the Attorney General's office to investigate the horrendous abuse of power under the former NPCA. 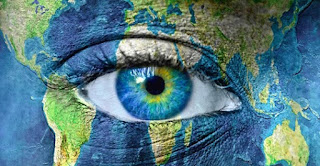 Please Click the blue links to get the rest of the story...


Posted by Niagara Winners Circle at 00:14